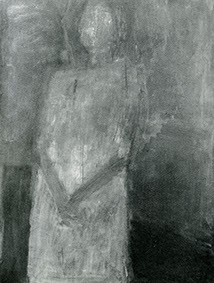 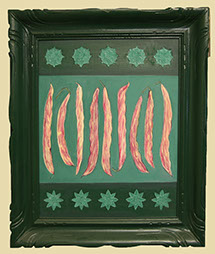 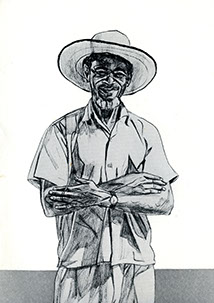 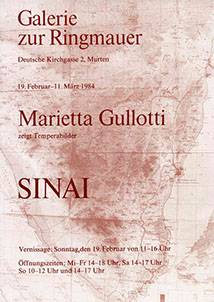 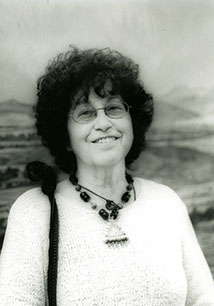 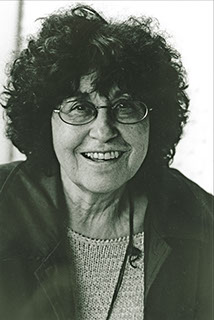 Some pictures in the studio...

On 19th July Marietta Gullotti was born in Berne, Switzerland

graduated with her teaching licence from the teacher-training college

Further education in Art: a one-year course at the Berne School of Art; then training in engraving at Atelier 17 in Paris under Stanley William Hayter; this was followed by training at Max von Mülenen's school for painters in Berne

Exhibited at the Swiss Art Exhibition held by the Lucerne Museum of Art, receiving favourable critique for her Personaggi

Scholarship exhibition at the Kunsthaus in Aarau, Switzerland

Stayed part of the winter in Paris. Discovered her environment. Back in Berne Marietta Gullotti created a series of paintings of fruit and vegetables; these works were first exhibited at the Kunstraum in Burgdorf, Switzerland, in 1988

During Autumn Marietta Gullotti began to paint Africans: oil paintings in black, white and silver, the motifs of which were taken from photographs

Marietta Gullotti worked for a longer period in a care centre for children affected by cerebral palsy. Following this, she travelled in Ghana and the Ivory Coast for two and a half months, gathering photographic material to use as a basis for further painting

A two-month trip to Mexico. Marietta Gullotti is impressed by Maya art and the energy, beauty and expressiveness of these works.

On her return to Berne the artist devotes her energy to drawings.

a prolonged stay in Jerusalem and a trip into the Sinai area, leading to the production of tempera landscapes

As an artist-guide for a holiday group Marietta Gullotti travelled to the Indonesian island of Bali. Until 2000 she worked for Baumeler Active Holidays as a tourist guide and art teacher.

Exhibition in the Galerie zur Ringmauer in Murten, Switzerland.

The critique in the Bernese newspaper Berner Zeitung was positive: view

Marietta Gullotti travelled to Bali for a second time. Exposure to Bali culture proved to enrich her own work

First trip to India to the Ashram of Sai Baba who then becomes her master. The philosophy of the non-dual vision of the Vedanta world will from now on be essential in her work

Exhibition of the Sinai paintings in the Galerie zur Ringmauer in Murten, Switzerland.

The Bernese newspaper Der Bund reported on it: view

Parallel to a studio exhibition of her first India paintings, Marietta began to withdraw further from the "the Art trade" in an attempt to continue along her artistic way free of current artistic influences

Second trip to Puttaparthi and to Sai Baba. She photographs the extraordinary  landscape that has become the most relevant topic in her painting although she keeps  working on portraits

A 2-month trip through southern India. She meets Sai Baba and Swami Premananda,  who then becomes an additional master for her. More trips to India in the years to  follow

Marietta Gullotti travelled to Mexico, where she met with her cousin Pedro Gullotti. These trips rendered further drawings. In 1997, dissatisfied with her earlier African works, she burnt most of them and started from scratch to re-create them. In an intensive work phase she produced works depicting, for the most part, women and children

In October, twenty years after her last trip to Bali, she visited the Island once again

Last trip to India to be present at the inauguration of the temple for Swami Premananda and to Samadhi, the resting place for Sai Baba

in may: solo exhibition in the ArchivArte Gallery, Berne >> about the exhibition 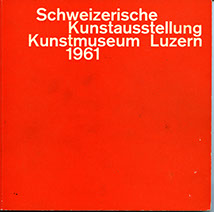 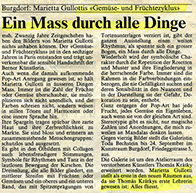 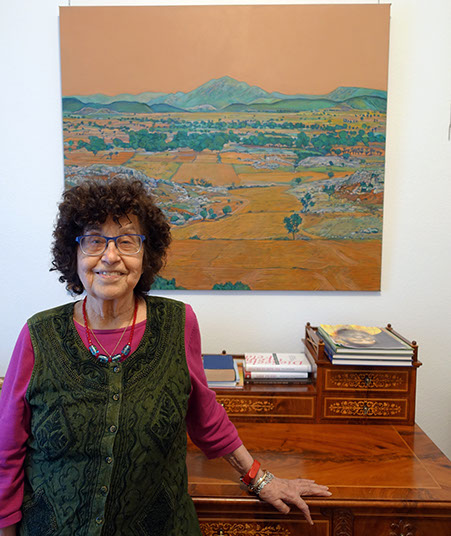